The Minority is calling for the total scrapping of the Electronic Transaction Levy (E-Levy) after informing the Minister in charge of finance that even a rate of 1.5% will not be accepted.

Mr. Ken Ofori-Atta on Friday, January 28, 2022, sat in a meeting between the Majority and the Minority in Parliament to try and reach a compromise for the approval of the controversial levy.

During the meeting, the Finance Minister disclosed that his outfit has resolved to decrease the rate of the E-Levy from the initial 1.75% to 1.5%.

The latest development which was expected to convince the Minority to accept the levy unfortunately did not work.

Sources at Parliament tell Modernghana News that the Minority remains resolute on their stands that the Electronic Transaction Levy is regressive and must be totally scrapped.

Today’s meeting follows a similar one held between the Majority and Minority in Parliament on Thursday, January 27, 2022, that ended inconclusively.

Stakeholder engagements are expected to continue from today through to next where Parliament is likely to have discussions on the E-Levy in the house.

Government officials at a town-hall meeting on Thursday gave several justifications for the need to have the E-Levy implemented.

The Finance Minister, Mr. Ken Ofori-Atta who was at the event in Koforidua stressed that it is needed to avoid government being forced to run to the IMF.

“If we don’t do this E-Levy, we’re just pushing ourselves in a way that would potentially end up in such a disaster,” the Finance Minister noted.

“Fixing and Unfixing It”- Unpacking the Lazy, Unproductive Politicking of Ghana – Kenneth Kuranchie

Pledges totalling $2.4billion were announced as part of activities to mark the Global Citizen Festival in New York City and Accra on Saturday, September 24, 2022.

Key commitments were announced to celebrate the 10th anniversary of the festival’s impact and advocacy, through the hard work of many partner organizations.

A statement issued by Global Citizen said the 2022 Festival saw “more than US$800 million announced to end extreme poverty NOW and US$1.6 billion announced by the European Commission and Canada as part of the seventh replenishment of the Global Fund to Fight AIDS, Tuberculosis, and Malaria on Sept. 21, in addition to the announcement of five companies signing on to the UN-led Race to Zero initiative to reach net-zero emissions by 2050”.

Of this funding, more than US$440 million was earmarked exclusively to initiatives to end extreme poverty on the African continent, with the remainder intended to reach people around the world, including across Africa.
The Global Citizen Festival campaign announced commitments by world leaders and governments in support of ending poverty now, including Canada, Belgium, Denmark, the European Commission, Germany, Ghana, Lithuania, Luxembourg, Malta, the Netherlands, Norway, Slovenia, United Nations, and the United States.

Financial and policy announcements were also made by many corporate, philanthropic, and NGO partners including Accenture, Cisco, Citi, Delta, the Dutch Postcode Lottery, Ford Foundation, Gavi and Girl Effect, the Global Menstrual Equity Hygiene Accelerator, Lego Foundation, Procter & Gamble, Rotary International, Verizon, WWT, YouTube and Google.org.
“Amidst all the doomsday messages we hear today, hope lies in the fact that millions of citizens are rising up to take action, more than any other point in history. 10 years ago, Global Citizen was just an idea – and 10 years from now we’ll see a generation of Global Citizens running for office, starting companies, and transforming communities,” said Hugh Evans, Co-Founder and CEO, Global Citizen.
In support of the Global Citizen campaign to defend the planet and take climate action NOW, five businesses officially signed on to the Race to Zero campaign to achieve net zero carbon emissions by 2050 as a part of Global Citizen Festival, including American Eagle Outfitters, Betterfly, Harith General Partners, Juan Valdez Café, and WWT.
Global Citizens have taken more than 2 million actions with Global Citizen in 2022 to help achieve Global Citizen’s mission to End Extreme Poverty NOW, more than doubling the record previously set by the international advocacy organization.
“With 43 days to go to COP, we need countries to move from pledges to implementation — as youth we have a critical role to play in making sure our nations do not backtrack on their promises,” said Dr. Omnia el Omrani, COP27 youth envoy, in a video message to Global Citizens at Global Citizen Festival.
With stages in Accra and New York, the event captured the Global Citizen ethos, channelling an eclectic array of musical talent in support of our efforts to End Extreme Poverty NOW and build momentum ahead of the G20 summit and UN Climate Conference, COP27, both in November.

Minister of Energy, Dr. Matthew Opoku Prempeh, has commended the Bulk Oil Storage and Distribution Company Limited (BOST) for the turnaround in its operational and revenue fortunes.

This comes on the back of the state-owned firm, increasing its profits to GH¢161million in 2021 after it recorded a loss of GH¢291 million in 2020.

Speaking at the first Annual General Meeting of the company, Dr. Opoku Prempeh said the development demonstrates that state-owned enterprises can deliver value through the right leadership and management to boost national development.

“The transformation is indeed massive, as evidenced in improved operational efficiency. This is the path to go if we should attain the path of State-Owned Enterprises contributing to the fiscal policy of government for its national growth and development agenda. Imagine if 100 SOEs each made GH¢150million net income,” Dr. Opoku Prempeh said.

The Minister disclosed that the improvement in BOST’s revenue was due to a core business strategy and an increase in petrol and diesel sales revenue of about 83 percent.

He added that an amount of US$611 million paid from the US$624 million debt accumulated in 2017 was generated from BOST’s internally generated funds.

The sector minister also lauded the management of the state-owned firm for the effective utilisation of revenue generated from the nine pesewas BOST margin on petroleum products.

He explained that proceeds from the petroleum levy were used to undertake renovation and repair works on fuel depots, decommissioning of tanks, revamping four river barges for fuel transportation on the Volta Lake, and the upgrade of the Akosombo jetty.

The energy minister also commended BOST for deploying cost-cutting measures in its operations.

“Genuine administrative costs grow upward and not downward due to factors like inflation among others but I would like to commend management for the prudence that resulted in these massive reductions in the cost of operations.

The company is spending less while achieving more for the government and people of Ghana; from the face of the record, this is an impressive performance that the company’s board and management need to be commended for,” the energy minister stated.

Dr. Opoku Prempeh in his concluding remarks reaffirmed BOST of government’s commitment to make the entity an effective and profitable one.

“I am aware of recent developments in the mass media on BOST, but I am also aware of the political economy around operations of the company. Government is also aware of the turf-war to get the company derailed, and we are not falling for those who seek to engage the reverse button,” he emphasised.

Silver Star Auto Limited, a popular automobile firm in Ghana has lost its deal as the authorized distributors of Mercedes benz in Ghana.

A Press Statement issued on Thursday, September 15, 2022 by the Company said Mercedes Benz Germany has decided to engage a new multinational dealer for the Ghanaian and West African market at large albeit leading the market share by far in Ghana for luxury vehicles.

“We have tried our level best to make a case with Mercedes-Benz in Germany without luck, all appeals failed to have produce any response from them leaving us no choice but to seek redress from the courts,” the company said in its statement.

Despite the separation, SSAL assured its customers that it will still remain an independent trusted partner for Mercedes-Benz advice, support, and aftersales service.

Below is the full statement 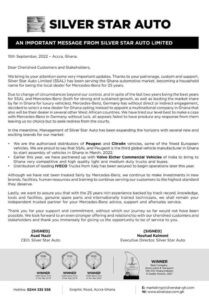